FORTUNA FLOW POETRY VOLUME I represents some of the fruit of Fr. Stan’s continuing response to the challenge of the great St. Pope John Paul II:

“If the Church holds back from culture, the Gospel itself falls silent. Therefore, we must be fearless in crossing the cultural threshold of the communications and information revolution now taking place (March 1, 2002).”

Clicking the button below will launch our NEW SnipCart easy-to-use e-commerce system.

Free Shipping in the US and Canada!

...for international destinations please e mail us flowfortuna9@gmail.com for shipping options and prices or call 1 718 401 1589 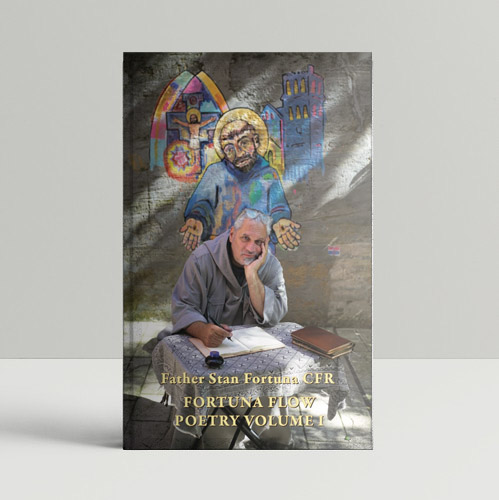 This first collection of contemplative poetry is based on Fr. Stan’s encounters at home and on the road through his missionary travels around the globe.

On-location photographs by Fr. Stan of these encounters accompany some of the poems. His Seraphic Father Francesco d’Assisi was a poet as was his major hero, Pope Saint John Paul II the great Doctor and Father of the Church. John Paul II describes the inspiring prophetic and poetic influence of Francesco:

“He  had a poet’s temperament, something which is amply confirmed by his words, his attitude, and his innate sense of symbolic gesture. He was…the creator of a new culture, both in thought and in art.” (John Paul II, March 18, 1994).